I love to build things. I think I get it from my dad who’s one of the most clever people I know. If you need something built, I guarantee you he’ll be the one to figure out how to do it…no matter how outlandish or unusual the project is. Seeing that ingenuity over the years has inspired me to enjoy working with my hands.

What does this have to do with board games? Today, we are going to preview Armpal, a new project on Kickstarter that will have you building a set of hydraulic robot arms that will be used in a variety of games.

Armpal is an unusual game that starts with you building a set of robotic arms out of a precut wooden parts and plastic tubes. The game comes with a detailed setup manual that walks you through how to build the arms, prime them, and also the three different attachments (claw, scoop, and magnetic crane).

Once built, Armpal has 3 default games you can play. The first is Stack Tower, that requires you to use the claw arm to stack wooden blocks in the center of the play area. Each side alternates until one player fails to stack a block and loses. 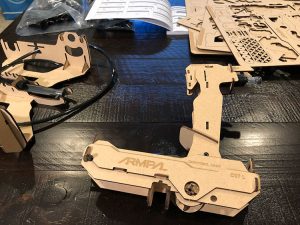 The second game is Excavator-Seesaw. Players are rushing to scoop as much material as possible into the scale buckets. After three minutes, the player who scooped the most wins.

The final game is a Transferring Race. This game uses the magnetic crane to move metal pieces from one area to another. The first one to finish wins.

Players are also free to make up their own game, these are just the ones that come with the game. Before we talk about the games themselves, we have to talk about the building project. Armpal, first and foremost, is a game for people who like to build things. If you like playing with lego blocks, assembling IKEA furniture, or doing custom woodwork, Armpal may be the game for you. Even if you are not a builder, I found that assembling the robotic arms was pretty straight forward. The instruction book did a good job with labeled parts and diagrams that anyone should be able to follow.

I think Armpal will work best for a project for someone to do with a family member or friend. Since you have to assemble two identical robotic arms, doing them together will not only make the experience more enjoyable, but also cut the time assembly time in half. It took me, by myself, roughly 10 hours or so to assemble everything. Fortunately, I’m a tinkerer by nature, so it was fun for me. But that may not hold true for everyone. Building these arms is a big draw of the game. Which also makes Armpal almost more of an experience than a straight-up tabletop game.

My one criticism of the building experience was that I would have liked a YouTube video of some of the steps. The hardest part for me was priming the hydraulic system. I’m still not sure I did it all correct, so having a step-by-step video from the publisher would have gone a long way to making the whole experience smoother. Granted, I was also working from a prototype, so hopefully, there will be one of these online after the final kits are fully produced. 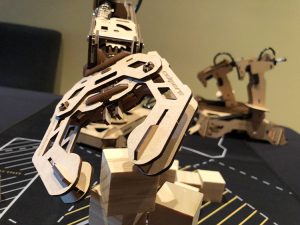 Once I got things working though, the games were pretty fun. Learning how to manipulate the arms took a bit of practice and trial and error to get you used to it. There are two handles that you move forward, back, left, and right to swing the arm in various directions. The whole thing is rather ingenious. The games themselves are simple and made to take advantage of how the robotic arms work. We found that the joy came from playing with the arms themselves, not really trying to win.

If you like to tinker or build things, Armpal definitely provides a unique gaming experience. It may be a time investment, but it also can be a rewarding experience, especially if you are working on the project with a child. Spending hours building this could be a great bonding experience with a fun family game at the end.

I look forward to the team at Armpal refining their product as even though working with the prototype was fairly smooth, there were still a few bumps here and there. But hey, this is one of the most clever and unique things I’ve played in quite a while. If you want to see some of the arms in action, I posted a quick video here.

Armpal just launched on Kickstarter, so if this seems like a game you might enjoy, or to find out more information, head over to their campaign page and check it out.